What Does it Do?

Alcohol is a depressant drug – it slows down the action of the central nervous system. Common experiences include dis-inhibition, relaxation, talkativeness and sociability. Higher doses can lead to loss of control (slurred speech, blurred vision and wobbly legs) and even loss of consciousness. 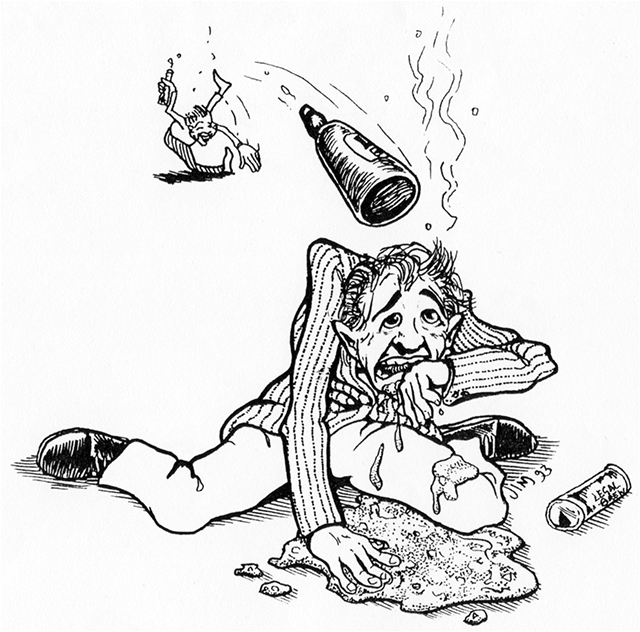 Alcohol use slows reaction times, so some activities (for example Driving, cycling, swimming or crossing roads) will become more risky. Alcohol use can affect someone’s ability to make rational decisions; it has been linked to sexual risk taking and the transmission of HIV and other sexually transmitted diseases. Regular use of alcohol can lead to tolerance (needing to take more alcohol to get the same effect) and physical dependance (someone who is dependant becomes ill if they don’t take alcohol). Alcohol use has been linked to lots of social problems, including domestic violence and violent crime. The loss of inhibitions can lead to aggressive behavior. It might also lead to relationship problems – being drunk isn’t much of an excuse if you say something to a friend you regret the next day.

Taking a large dose of alcohol can cause memory loss, so you might not even remember what you said or why. Long-term use of alcohol is known to cause many physical illnesses including liver damage, stomach cancer and heart disease. Alcohol causes the body to lose heat to the environment – the blood vessels dilate, bringing them closer to the surface of the skin.

Alcohol should never be given to someone to ‘warm them up’ (it will make them feel warmer, but their body will actually cool down). Alcohol will also reduce a persons sensitivity to pain. It’s possible to suffer injuries and not realize until the alcohol wears off – burns, cuts, bruises and even frostbite might go unnoticed. Alcohol causes dehydration, so taking alcohol with other drugs that dehydrate (like speed and ecstasy) is potentially very risky.

A large dose of alcohol will cause overdose leading to loss of consciousness and possibly even death. For a non-tolerant person (someone not drinking regularly) about 30 units (a bottle of spirits) would end in a trip to hospital and could be fatal. If someone is drunk, the only thing that will help them to sober up is time. The body breaks down alcohol at the rate of one unit per hour – it’s metabolized by the liver, which only works at one speed. Giving someone black coffee, speed or a cold shower to sober them up won’t make their liver work any faster. They’ll still be drunk – their judgement will be all over the place – but they’ll be wide awake. Taking alcohol with other drugs that have depressant effects (like heroin, methadone and some prescribed medicines like temazepam, diazepam or Valium and antihistamines) will increase the potential for overdose. If you are with someone who has been drinking and loses consciousness, make sure they are in the recovery position and try to stay with them. Even if they don’t overdose, they could vomit while they are unconscious and choke. Calling for an ambulance will ensure that they receive medical attention should they need it.

The Health Education Authority (HEA) indicates that 3-4 units a day for a man and 2-3 units a day for a woman are relatively safe benchmarks for drinking. People who regularly drink more than this increase the risks of suffering alcohol-related illnesses. If you drink, having several alcohol-free days each week will reduce the risk of harm. The HEA suggests that pregnant women should not drink more than 1-2 units of alcohol a week. One unit = half a pint of beer, lager or cider, one glass of wine or one 25 ml measure of spirits. Many of the alcoholic colas, lemonades and other fizzy drinks available contain as much alcohol by volume as beer or cider.